Frustrated with your bicep workout?

Training like a Trojan but the tape measure’s not budging?

You’re probably doing one of these four things wrong:

1. Not Using a Full Range of Motion.

Perhaps the most common mistake in any bicep workout.

Here’s what a partial range of motion looks like:

Curling the weight involves using the front delts, with hardly any bicep involvement.

The bar may look like it’s moving, especially when viewed from the front.

But when examined from the side, there’s really not much curling happening.

What a full range of motion should look like:

Start with the bar resting on your upper thighs and elbows pushed slightly forward, not drawn rearwards.

You’ll immediately notice the difference – a stretch in the lower portion of your biceps.

When you start to lift, avoid using your upper thighs to catapult the bar upwards.

Curl the bar upwards with your biceps strength only until you get a full contraction.

When you’re biceps are fully contracted, then you may use a little shoulder involvement to tuck the bar into your neck under your chin.

This allows you to strongly engage the upper portion of your biceps.

Without getting too technical, it’s because the biceps do not originate from the top of the upper arm (humerus).  They are actually attached to the shoulder blade.

This tucking action at the end of the lift allows for a full squeeze.

Some trainers find this places a strain on their elbow joint, so you may wish to experiment and see what works for you.

Important:  Never do anything if it causes pain or discomfort.

As you lower the bar, maintain the elbow position in front of your hips.

You’ll notice a greater distance than usual between the bar and your torso as your elbows pass through 90 degrees.

If you’ve not given much thought to using a full range of motion before, I promise that you’ll really feel the difference…especially in your lower biceps.

Remember to push your elbows forward slightly to fully straighten the elbow joint.  Embrace the stretch. 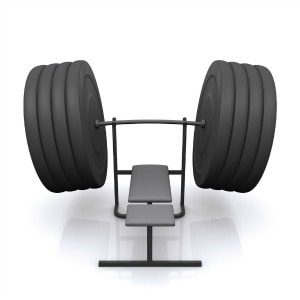 Using too much weight during a bicep workout is usually a psychological cause.

The biceps are historically a symbol of male virility and strength.

So a bicep workout is particularly prone to ego lifting.

Self-deceit is far easier when performing bicep exercises.  Other lifts such as the the bench press or dead lift…not so easy.

Trainers recruit their backs, legs and front delts…anything to get the weight up.

His gym buddies would use 80 pound dumbbells.

Yet Arnold’s iconic biceps where much larger and thicker.

When Arnold’s training partners questioned why his biceps were so much larger than theirs, his answer was simple:

He lifted the weight using only his biceps.

When the other gym members trained using the 80 pound dumbbells, they’d engage their front delts and apply tons of momentum (see below).

One of my senior friends used to laugh about his gym nickname:  the oldest swinger in town. 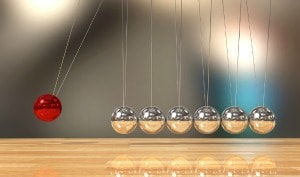 He couldn’t understand why his biceps wouldn’t grow!

He’d start curling by leaning forward excessively.  Next, he’d swing the bar upwards with as much momentum as he could muster, leaning rearwards in the process.

Momentum is closely related to using too much weight.  However, even lighter lifters can fall fowl of the momentum trap.

This results in the weight feeling even lighter.  This in turn does little to stimulate your muscle fibers, resulting in poor growth.

Be mindful if you’re training your biceps with dumbbells.  This can make you more susceptible to swinging.

Unlike using a bar which has a natural stopping point, dumbbells enable you to swing the weights behind you, as if throwing a ball underhand.

Control the weight on the way down.  Resist the pull of gravity and take advantage of the negative portion of the rep.

Those who skimp on their negatives lose out on half the benefit of the exercise!

The inexperienced lifter may not understand what full range of motion is.

Therefore, they often copy what other trainers are doing in the gym.

If those people are inexperienced or have ego issues, then everyone’s copying the wrong way to do bicep curls!

Read: How to Get Bigger Calves: Add 2 Inches to Your Calves

Despite what we’ve talked about, partial range of motion can have its legitimate uses.

But you have to know when and how to use ‘partials’ to benefit from them.

Try using creating cheating near the end of a set to overcome sticking points.

Another method of cheating is to allow you to lift heavier weights throughout your entire set.

This tactic is a form of shock training and can help to overcome short-term plateaus in strength.

I’ve heard many reasons why trainers use these methods in their bicep workout.

And perhaps the most prevalent is they’re trying to ‘hit’ a certain part of the bicep.

Whilst this is certainly possible, it’s worth bearing something in mind.

The shape of your biceps, more so than any other muscle, is determined by your genetics.

It’s far easier to alter the appearance of your chest with incline work or develop more width or thickness to your back.

Those who possess long bicep muscles with no gap in the crook of the elbow, will usually have flatter looking biceps.

Try as they might, many of these athletes will be unable to gain much peak.

Compare this with bodybuilders who have shorter biceps.  For them, building a biceps peak may come much more naturally.

If you have short biceps, no amount of preacher curls will fill that gap.

Those who think otherwise are attempting to build muscle on a tendon…which is impossible!

Avoiding these four common mistakes in your bicep workout will give you FAST results.

Be mindful of working the muscle and use cheating, partials and momentum sparingly.

Employ these methods tactically and to serve a specific purpose, rather than simply to use more weight.

Bigger Biceps or Your Money Back

Frustrated with your lack of bicep growth?

How would you like to add massive size to your upper arms in just 8 weeks?

These amazing old school arm building secrets can add up to 2 inches to your arms in only 8 weeks!

If you’re unhappy with your biceps growth, then I highly recommend you check out Old School Arms.

Here’s just some of what you’ll learn…

…and much, much more!

Old School Arms is currently on sale for only $27 and if you order now, Paul will throw in 8 FREE bonuses, yours to keep in the unlikely event that you decide to return Old School Arms.

Supply of these FREE bonus materials is limited, however, so don’t delay and order your copy of Old School Arms today for your risk-free, money back offer.